On my last trip down to Argentina I had a chance to fly on American Airlines First Class Flagship Suites before the existing was replaced. American Airlines new 777-200s will no longer have a first class cabin and instead feature a superb looking new business class.

My trip began in Atlanta and had a short flight down to Miami where I connected with my direct flight to Ezeiza International Airport in Buenos Aires. While in Atlanta I had a chance to enjoy the The Club lounge again, which only solidified my opinion that it's likely the best lounge at ATL.

Over the last several years I've spent well over a year in Argentina a separate trips, but until now I always found myself entering country overland to avoid the countries ~$160 reciprocity fee. Luckily this time around I was able to put my Italian passport to use and avoid ~$300 in fees for both Argentina and Brazil! 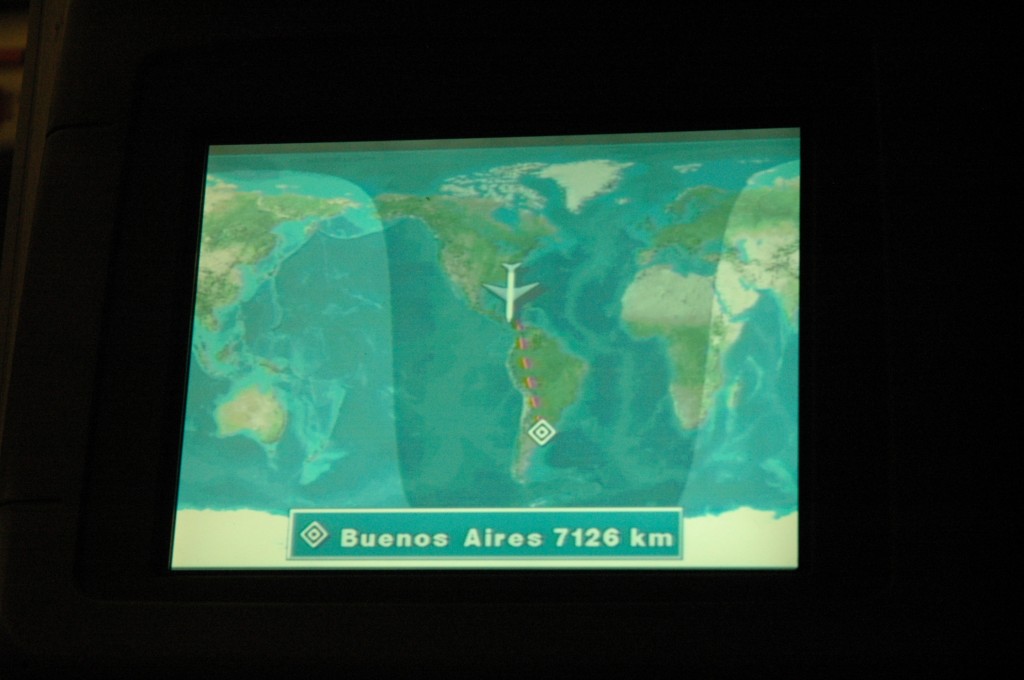 It's fairly common to find that South American countries charge a reciprocity fee equivalent to the cost of a visa to enter the U.S. It is basically a 'you charge us to enter your country, we're going to charge you the same'.

In the past the only point of entry that was actually set-up to collect the reciprocity fee was at Ezeiza International Airport, making it possible to fly into the domestic airport, take a ferry from Uruguay, or travel by bus from a neighboring country and avoid paying the pesky $160 fee. As far as I know this isn't the case anymore, less possibly a few land crossings.

If you are landing at EZE, here is a great airport guide to getting through the airport, as it can be a bit complicated at times. 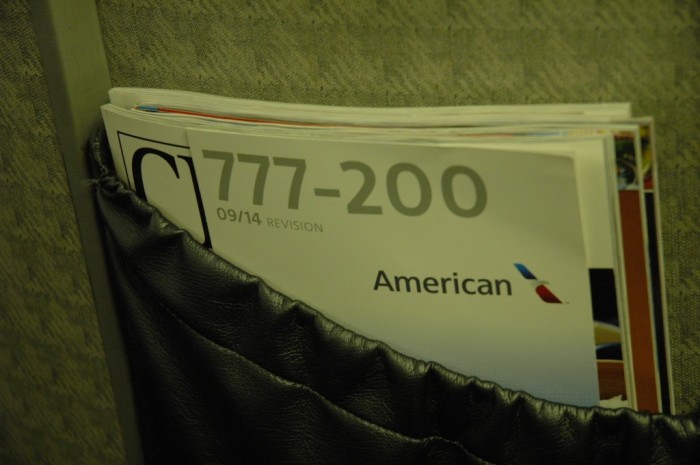 My first impression was that the cabin and seats were very spacious and provided quite a bit of privacy. I was seated in the single row of seats next to the window, which I found ideal for a solo traveler. The obvious drawbacks of the older cabin were a small in flight entertainment screen and a well worn seat appearance.

If your a traveling couple, a nice aspect of the two middle seats is that they can be rotated to face each other. This makes it possible to sit directly across from your travel partner and share meals, etc. 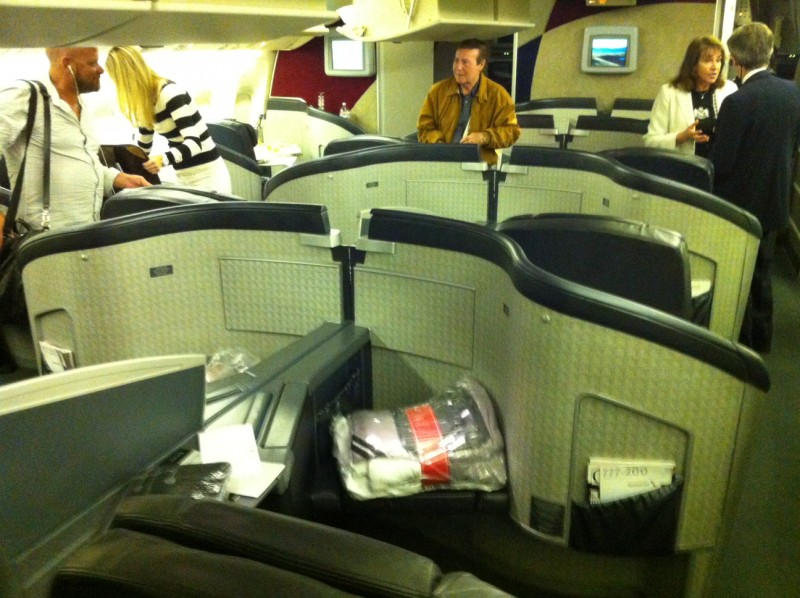 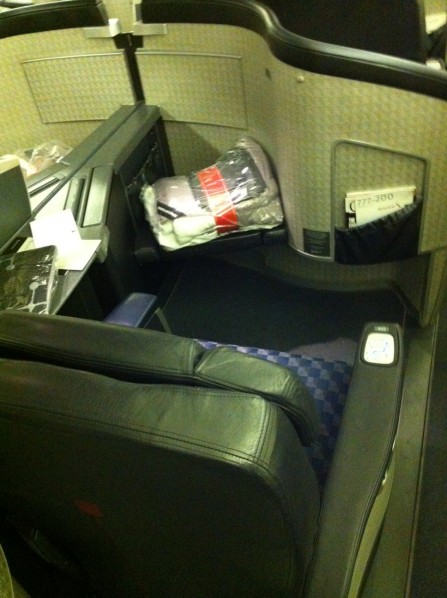 The pajamas, blankets, and pillows were placed on the ottoman of the seat. 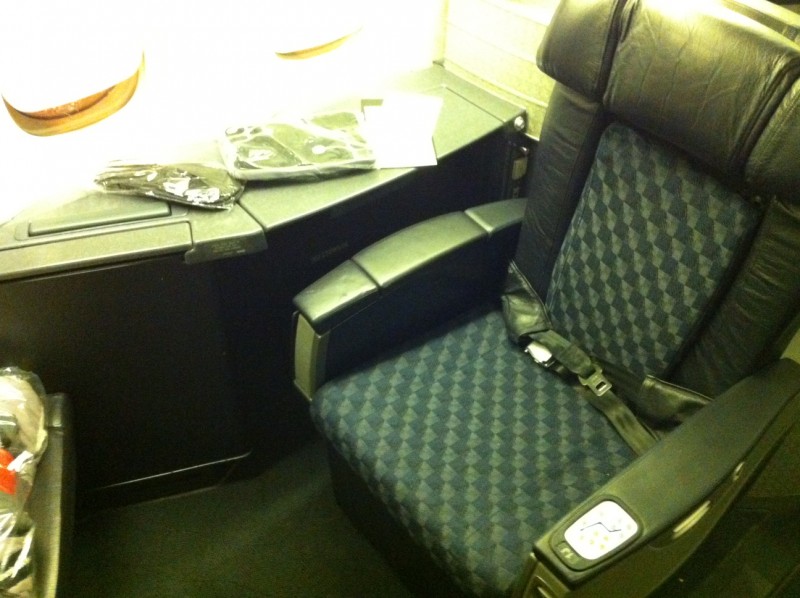 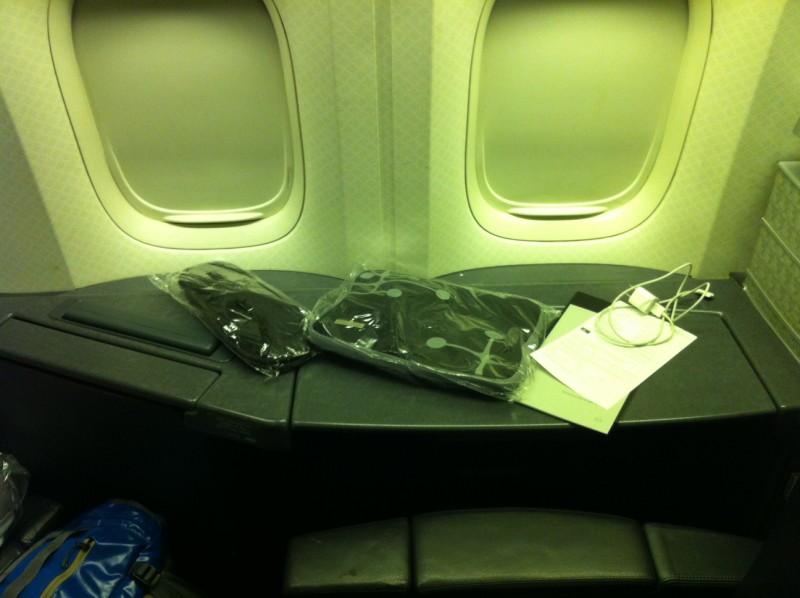 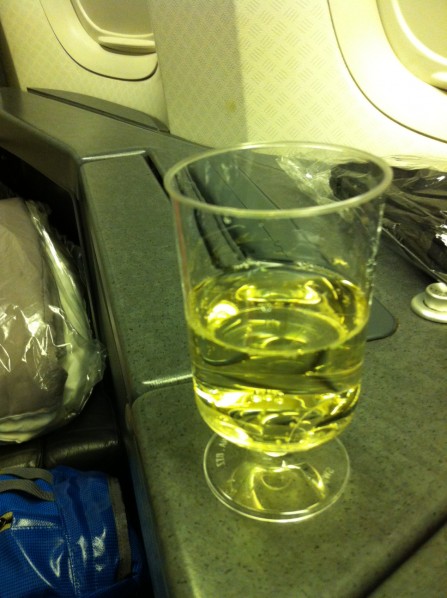 Shortly after taking my seat welcome drinks were delivered, if I remember correctly there were options of juice and champagne. My seat had plenty of storage room on the side table next to the window and amenity kits along with Bose headphones were distributed. 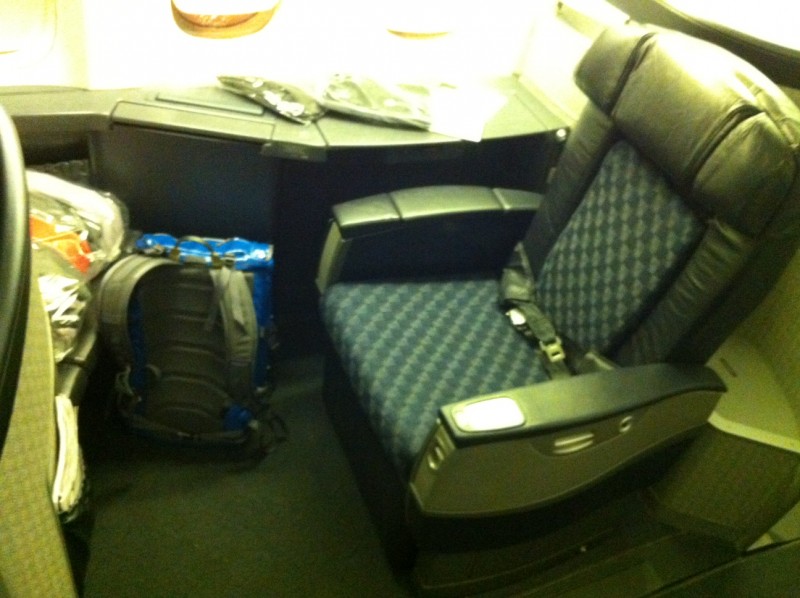 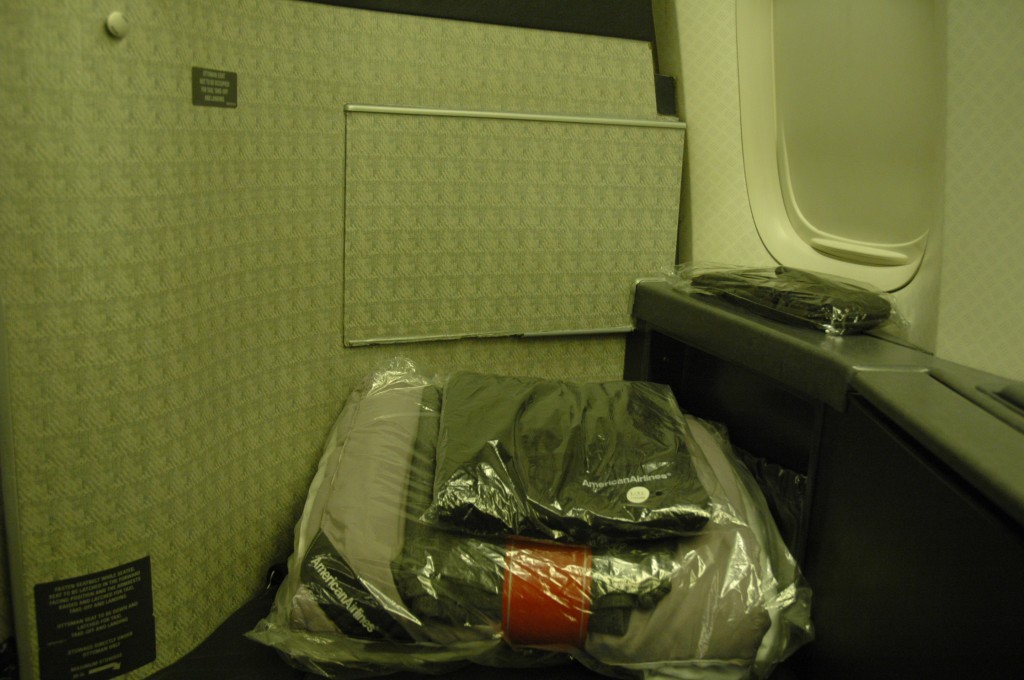 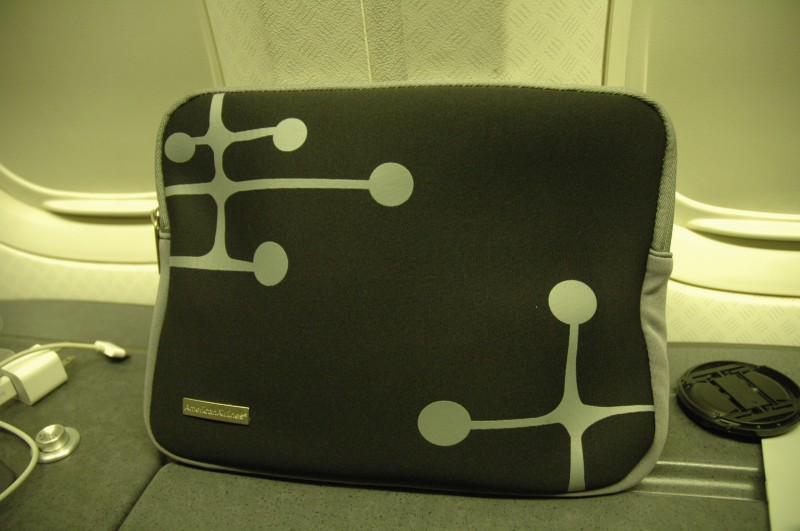 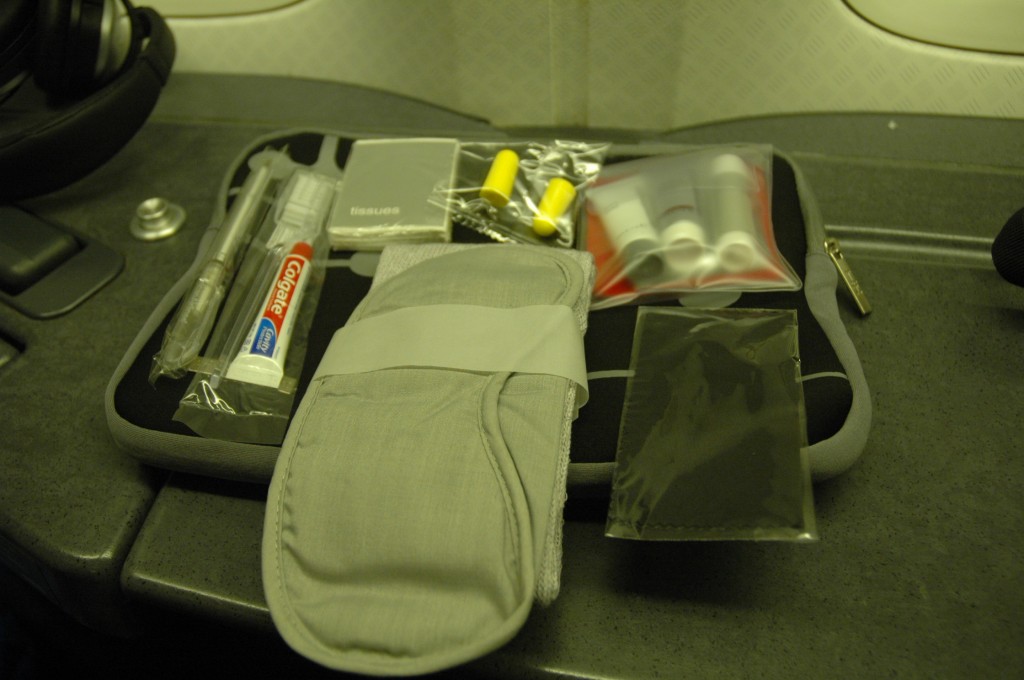 The amenity kits on American Airlines First Class are pretty a unique neoprene bag that can double as a iPad case. Included in the amenity kit were your standard items---ear plugs, tissues, sleeping mask, and other personal care items.

Although the entertainment system is outdated and small, the Bose headphones are a nice touch that make for great listening to movies and music during the flight. 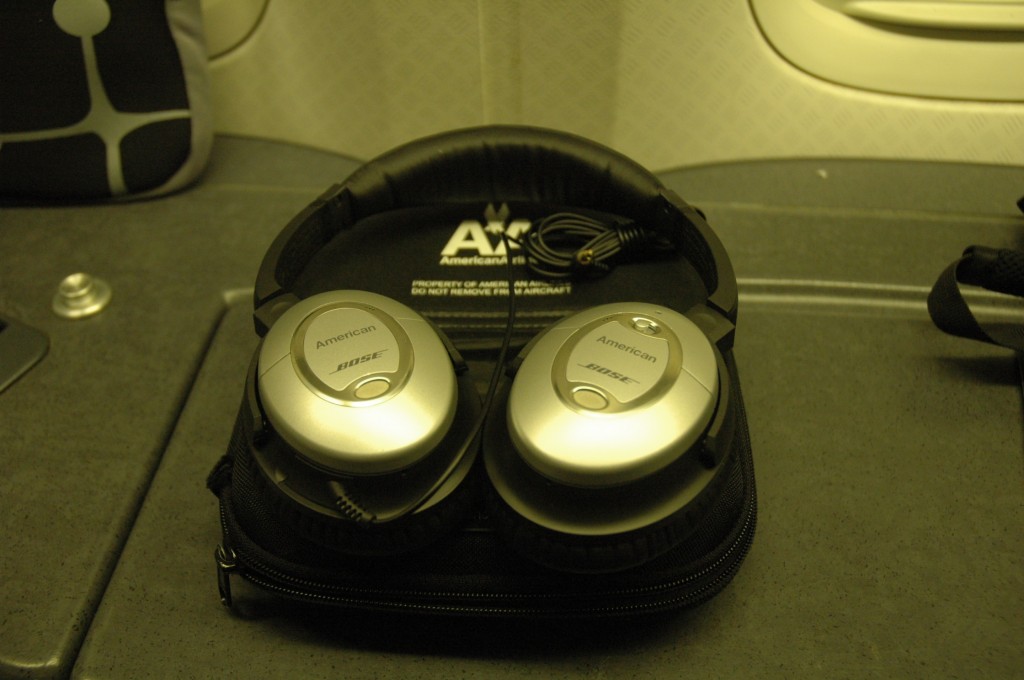 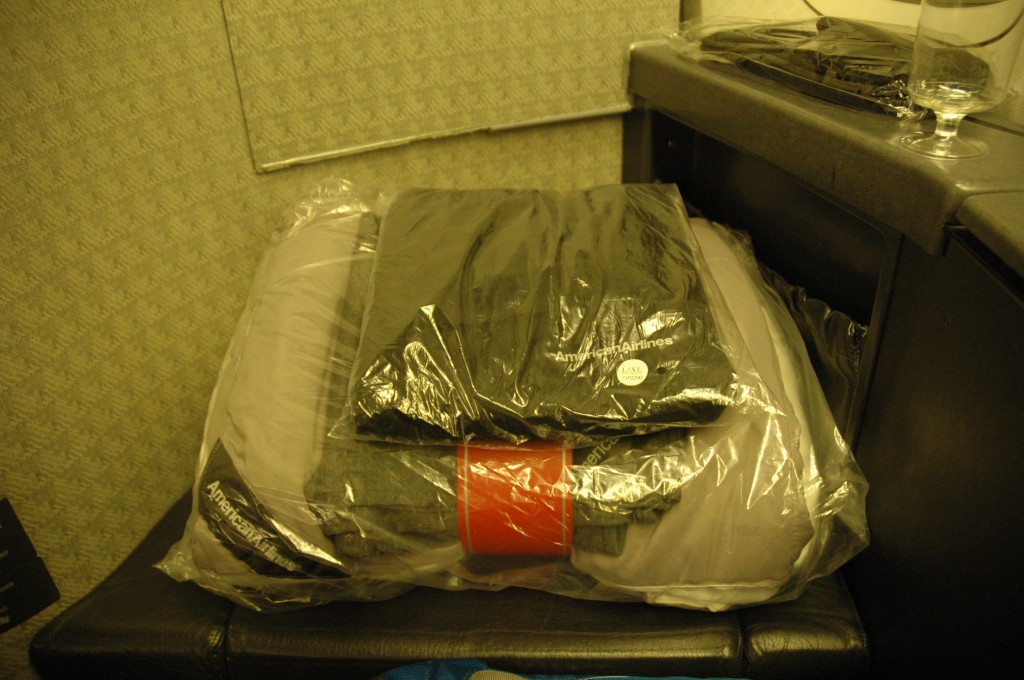 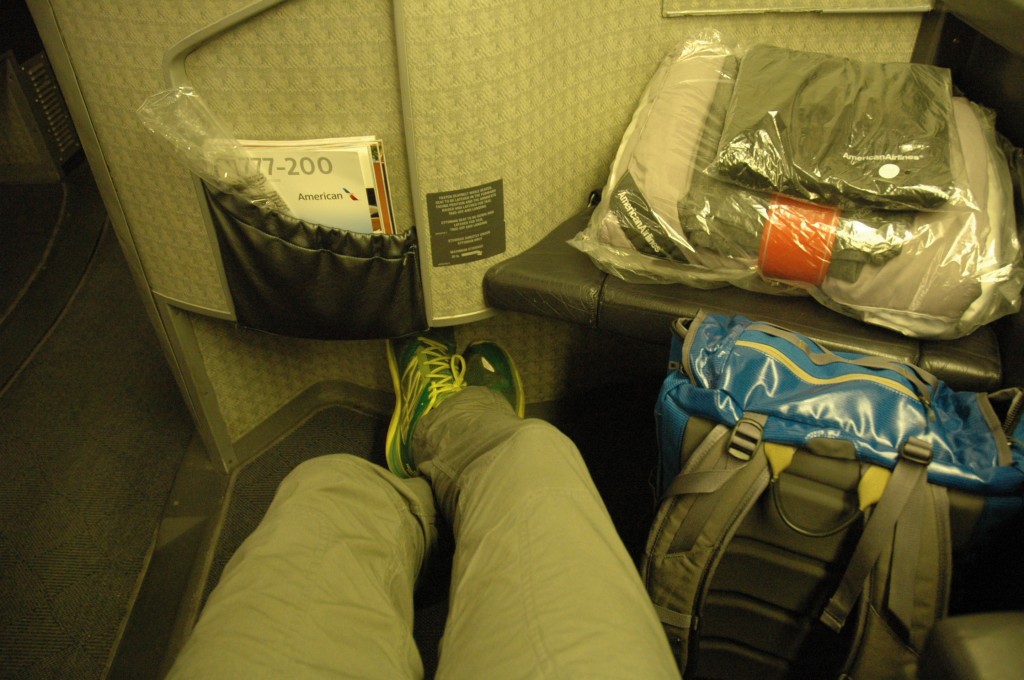 The seat was plenty spacious and even at 6'3" I had enough leg room and space to stretch out. I also really liked how wide the seat was and it even made for a better bed when it was in lie-flat position. 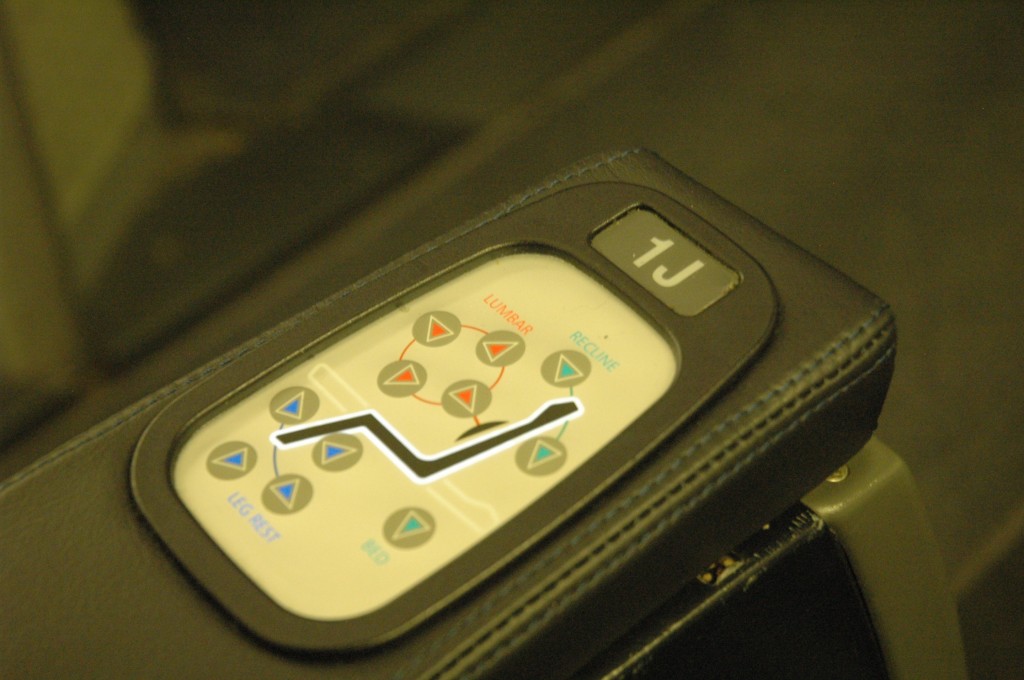 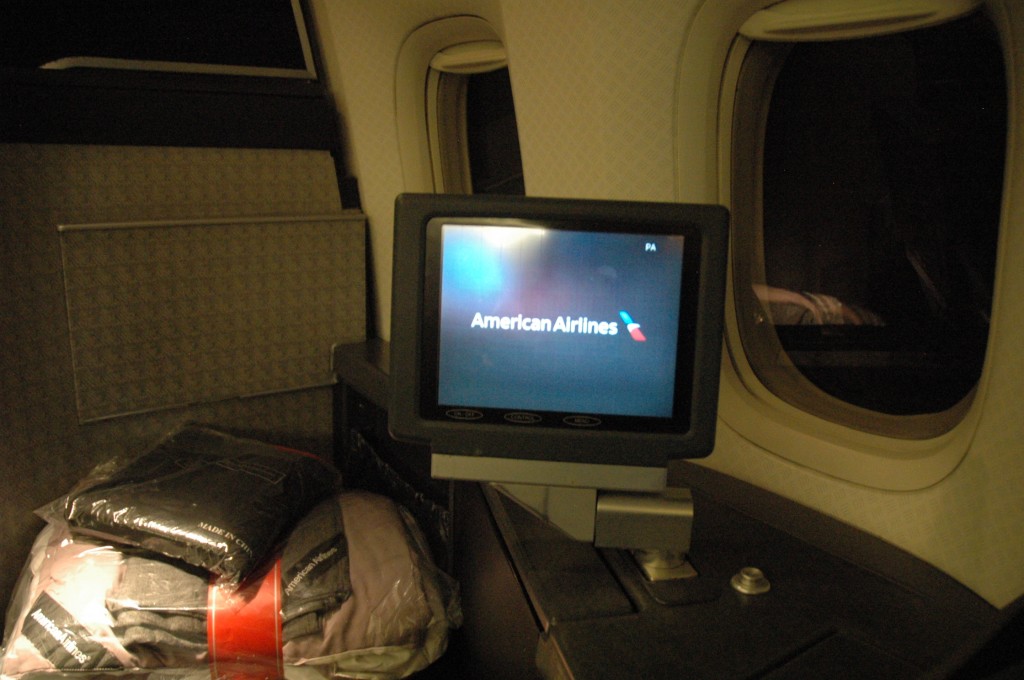 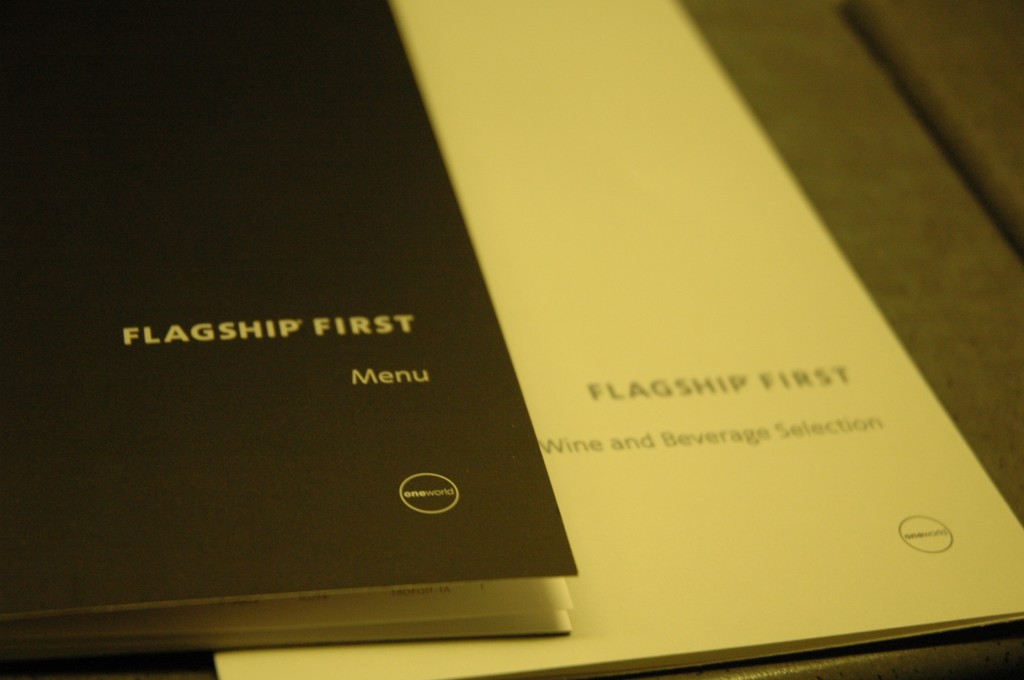 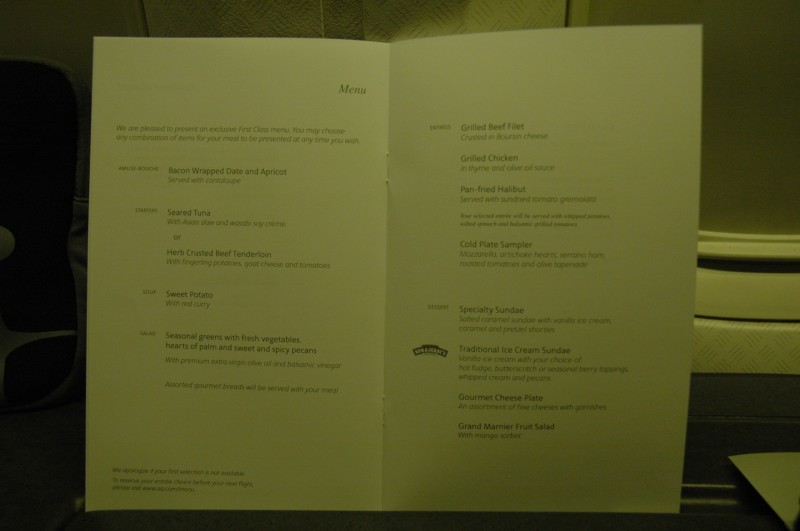 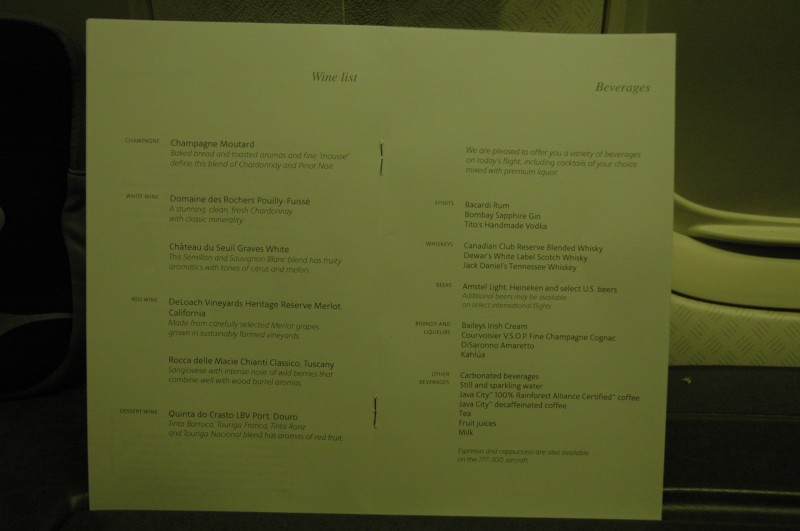 Menus and warm nuts were handed out before meal service. 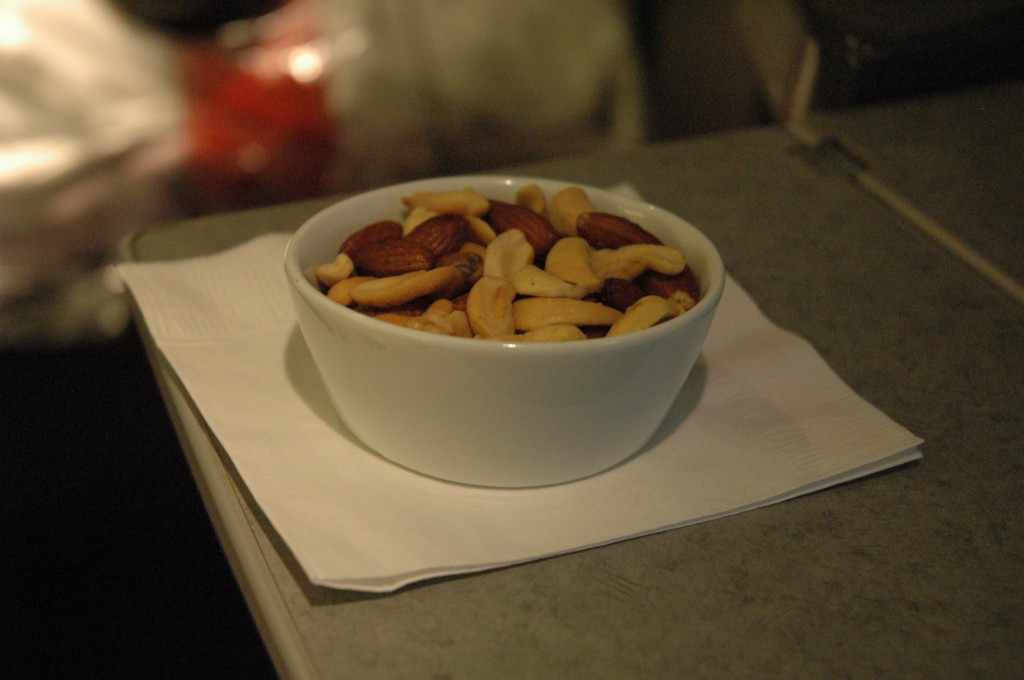 To start the meal service an appetizer of cantaloupe wrapped in prosciutto, then seared Ahi Tuna with pickled cucumber. 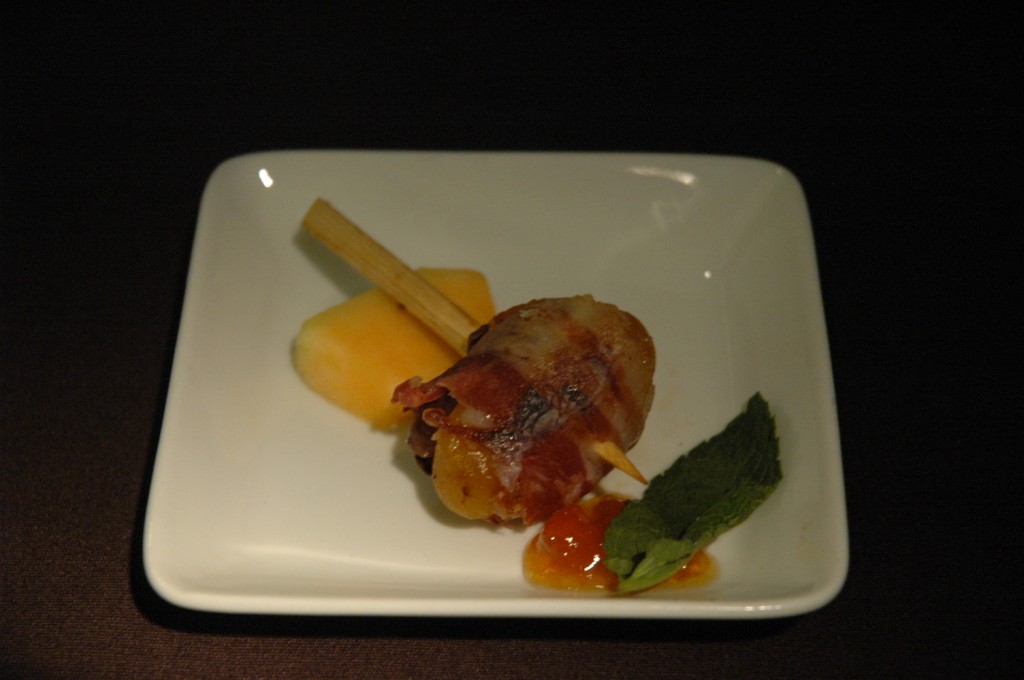 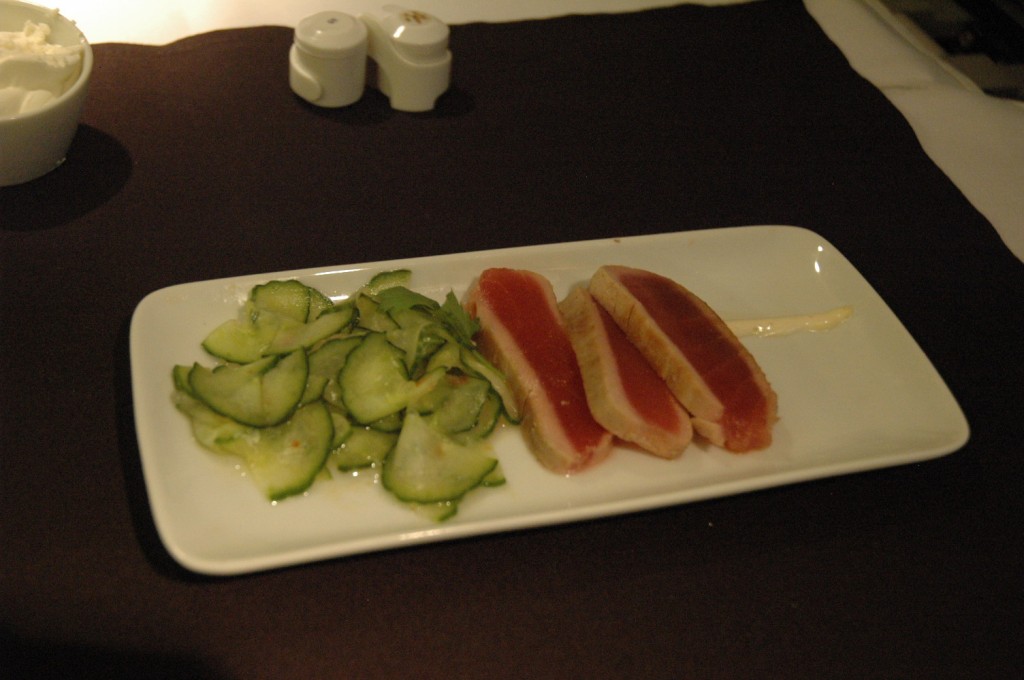 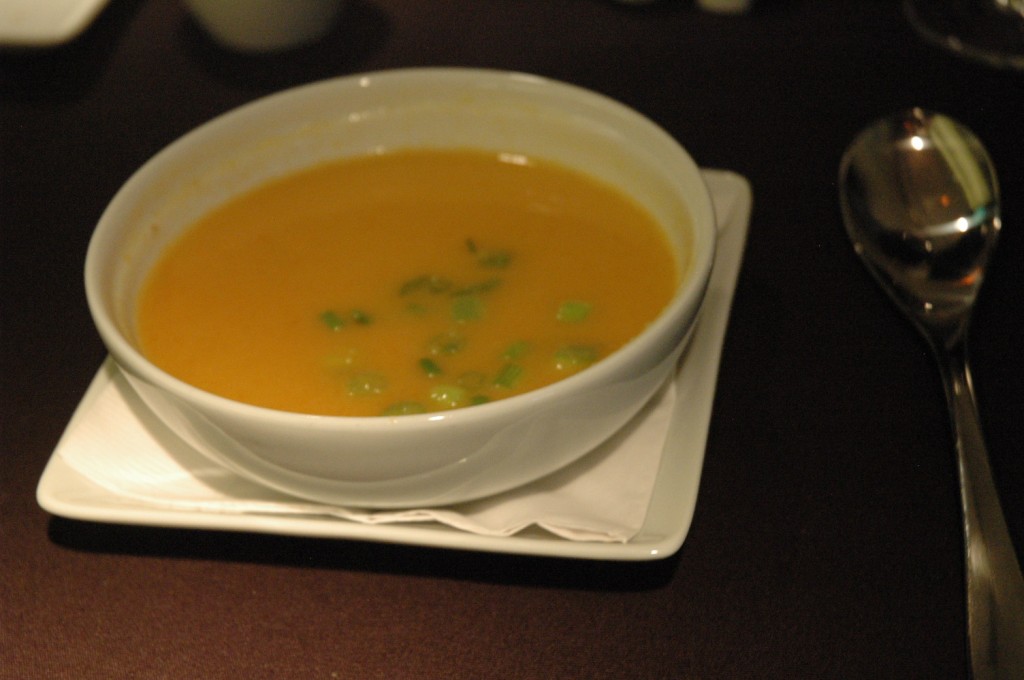 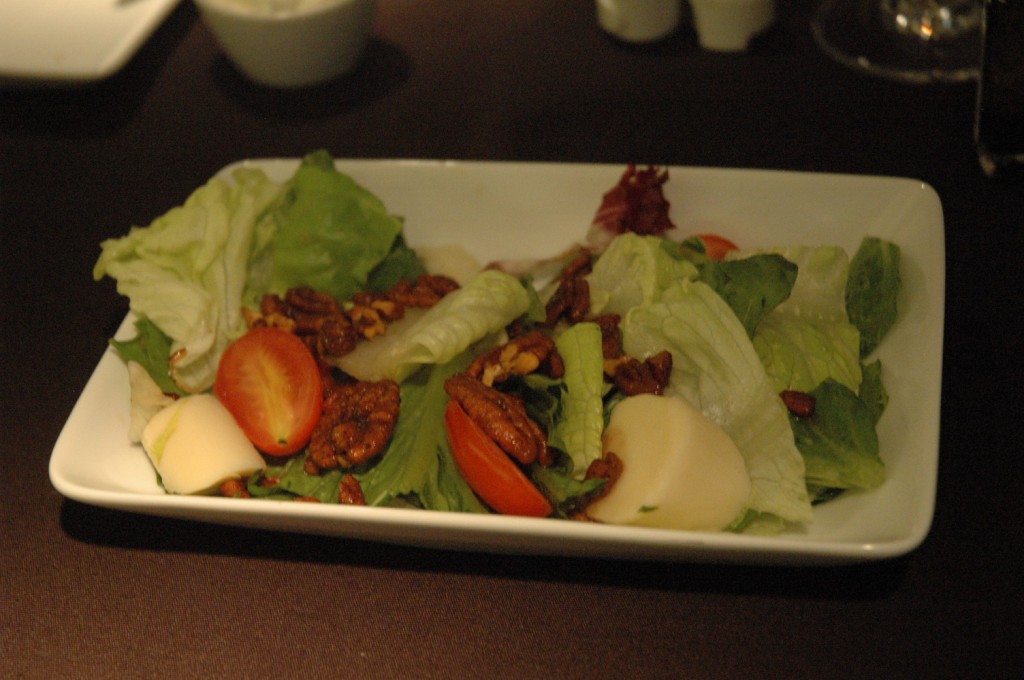 I ordered the steak for the main entree. All the food was actually quite good, but comparatively I would say Delta's Business Elite is superior---both service wise and food. 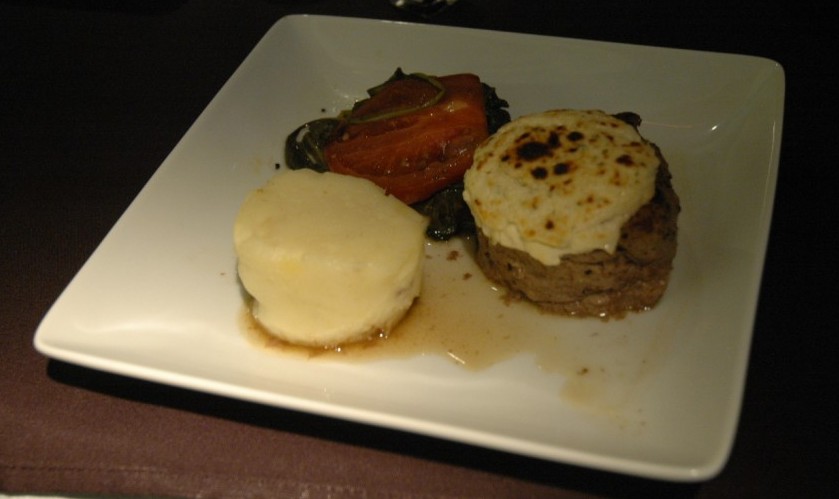 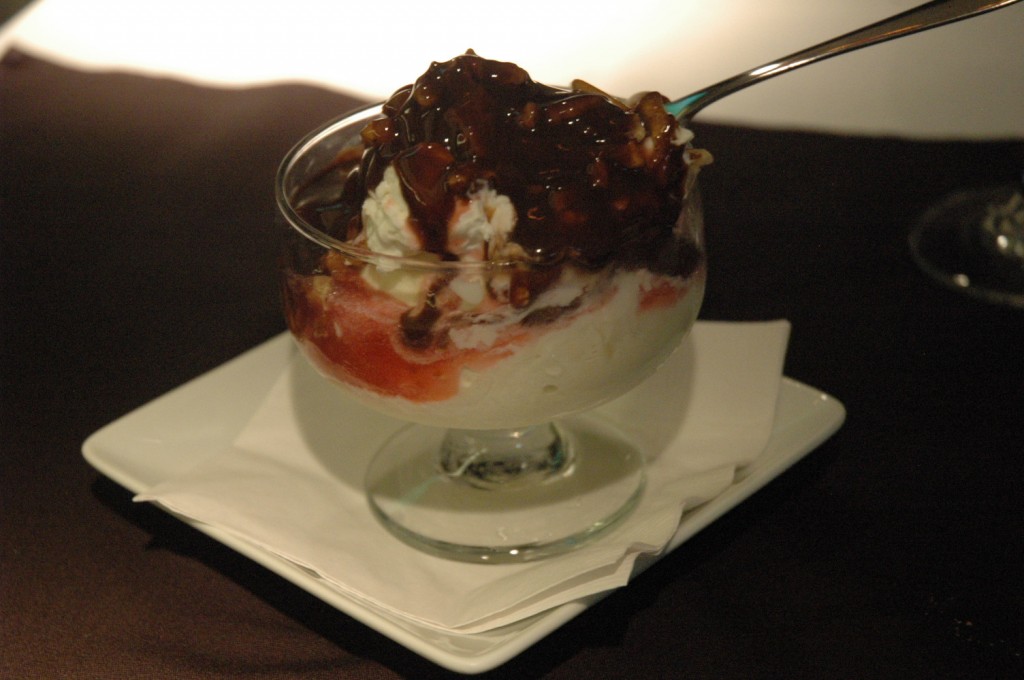 After meal service I prepared my bed into it's fully flat position. One of my favorite aspects of this seat is that the bed is actually very spacious and there is no constraining foot cubby, which can sometimes get to too warm. Both the blankets and large pillows are great for sleeping during long international flights. 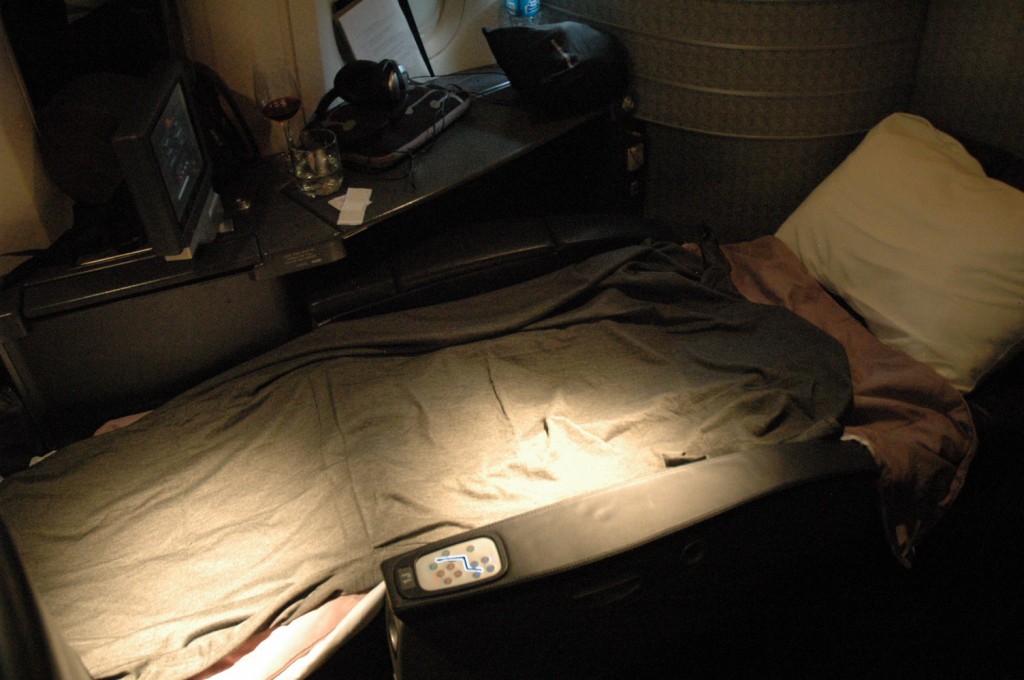 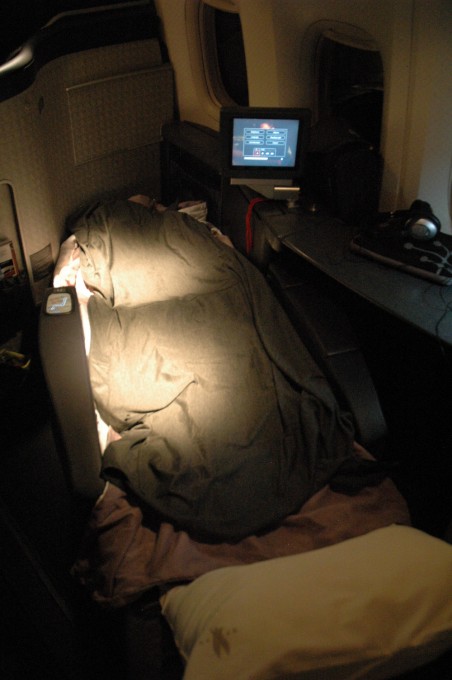 Overall the flight was very comfortable and I ended up sleeping until just prior to landing---sorry, no breakfast shots!

I have no complaints as the product as a whole, but the aged design is obviously ready for a facelift. Service was good, but of course there are always a few areas that could be improved to make things run smoother and feel more competitive with the top first class services in the world.

I've only flown Delta’s Business Elite product to South America in the past and although the lie-flat bed can be a bit cramped for a tall person I'd still take Delta's product---seats, service and food---over American Airlines.