MENUMENU
The 40,000 mile US Airways® Premier World MasterCard® offer is currently among the top airline credit card offers available. With the US Airways and AA merger going through it’s only a matter of time before this card will no longer be available, but until then it remains a great way to earn US Airways miles.
Over the next couple of weeks, I’ll publish a series of articles focusing on the US Airways Dividend Miles frequent flyer program covering how the program works and some of the most valuable ways of redeeming miles for award tickets. This post will serve as an introduction to the program and ways to earn US Airways miles.

US Airways has two regions within Asia: North Asia and South & Central Asia. The following tables break down the details of which countries are within these regions.

With each of the regions defined, let’s take a look at how much award flights will cost for flights from the US to each region within Asia.

The following shows a snippet of the US Airways award chart for the two sub-sections in Asia. The prices shown are for round-trip awards in economy, Business, and First Class. US Airways does not price out one-way redemptions, so even you only book a one-way flight you will pay for a round-trip award.

Recall that there are still some Star Alliance partners that can be booked using US Airways miles. Luckily, the award chart for the Oneworld Partners and Other Partners is the exact same in terms of redemption rates!

It’s worth noting that US Airways prices their awards as one-ways. This doesn't mean they allow one-way awards, but merely that if the outbound is in economy and the return leg is in First Class then you won’t be charged a full First Class round-trip price!

Additionally, since you are allowed 1 stop-over or 1 open-jaw without many restrictions, a little creativity can go a long way in maximizing your miles.

To maximize your US Airways miles, consider the following itinerary as an example: 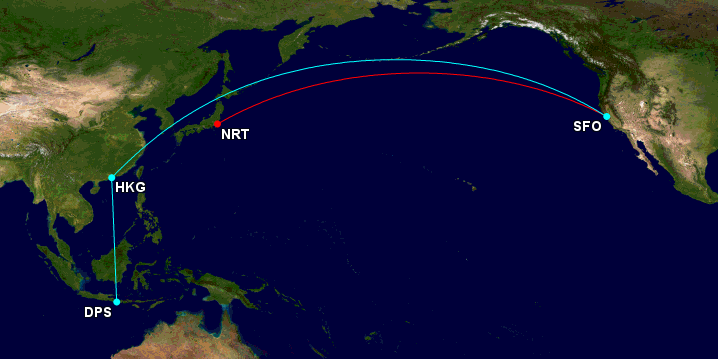 The empty portion is the open-jaw which can be filled by hopping around the various exotic destinations such as Hong Kong, Phnom Penh, Bangkok, Kuala Lumpur, and Bali.

The return portion will be from Bali to San Francisco while connecting in Hong Kong. You can visit Japan, Hong Kong, Cambodia, Thailand, Malaysia and Indonesia for only 70k in economy, 115k in Business Class, and 140k miles in First Class.

Cathay Pacific and JAL tend to have some of the best premium cabins in the sky which makes this redemption that much sweeter!

For the adventurous folk this gem of an award is priceless, but it does require a bunch of legwork ahead of time in finding cheap airfare, understanding trains, ferries and buses in another part of the world.

This is by no means an easy task so for people who may not have the time to visit so many places, you can simplify this itinerary to the following: 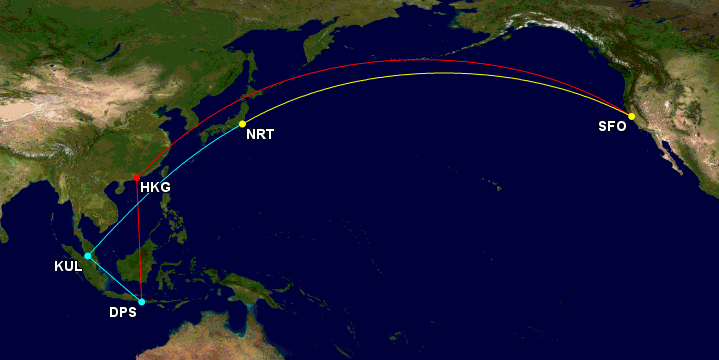 You will stopover in Japan therefore you can visit Japan and relax on the beaches of Bali for only 80k / 120k / 160k miles!

While having a stopover within the same region is easier to ticket, you can also have stopovers in another region to fully maximize your miles. Recall you can have your stopover either on the outbound leg or the return leg. The following is a breakdown of possible places for a stopover on an US Airways award ticket to Asia:

You can also have stopovers in Central America as well as Africa, however since there aren’t many direct flights from here to Asia, it will take that much more work to convince the booking agent to price out this award.

You need to either use Qantas or British Airways’ search engines to find all partner award flights. For American and US Airways specific flights only, the AA search engine will be your best bet.

Awards to Asia are as good as they can get with US Airways miles. The complexity of the award of course will be dependent on various factors such as how much time to devote to a certain trip, but as seen earlier there are possibilities to explore a lot of places en route to a destination or flying back home in premium cabins for a very cheap mileage redemption rate.

Since US Airways doesn’t pass on fuel surcharges (apart from British Airways operated flights), US Airways Dividend mile redemptions are worth that much more. You can make some really innovative itineraries since the routing rules are fairly relaxed and regional redemption rates are very competitive.

You can tour most of Southeast Asia for 120k in Business Class or you can include Japan for 115k with some additional tickets for using some low cost carriers for transport between Japan and Hong Kong.

Another thing to note is that since US Airways awards are manually booked, it may take multiple tries to get a complicated award booked and priced because some booking agents aren’t willing to try things they haven’t seen before.