By: Rand Shoaf
Updated: November 9, 2019
Disclosure: Well Traveled Mile has partnered with CardRatings for our coverage of credit card products. Well Traveled Mile and CardRatings may receive a commission from card issuers.
The 40,000 mile US Airways® Premier World MasterCard® offer is currently among the top airline credit card offers available. With the US Airways and AA merger going through it’s only a matter of time before this card will no longer be available, but until then it remains a great way to earn US Airways miles.
Over the next couple of weeks, I’ll publish a series of articles focusing on the US Airways Dividend Miles frequent flyer program covering how the program works and some of the most valuable ways of redeeming miles for award tickets. This post will serve as an introduction to the program and ways to earn US Airways miles.

US Airways, along with their Oneworld partners have numerous flights to Central and South America. US Airways operated flights however only fly to Brazil and these routes will be discontinued in January 2015.

US Airways defines the entire continent of South America as one region and everything between the United States and South America as Central America. This makes it cheaper to redeem awards to southern South America when using US Airways miles as compared to American Airlines (40k), Delta (60k) or United (60k)

The following shows a snippet of the US Airways award chart for Central America on US Airways flights only. The prices shown are for round-trip awards in economy, Business, and First Class. Also remember that US Airways charges the round trip price for one-way award redemptions.

Note that the award chart for Central America lists no Off-peak redemption rate!

Here is the US Airways award chart for South America:

One of the fallouts of the US Airways + American Airlines merger is that there are no Off-peak awards to South America anymore. Previously this was one of the great redemptions since you were able to travel to Brazil or other great South American destinations for only 60k US Airways miles in First Class!

US Airways hasn’t gotten around to updating the award redemption chart, but they did remove South America from the Off-peak dates section on their website.

Here is the snippet from the Oneworld partner award chart for Central and South America: 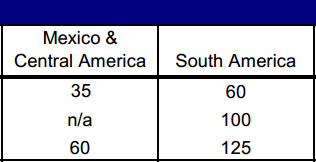 Most flights to Central America are two cabin flights therefore the Business Class redemption rate is represented by “n/a.” South America on the other hand has both 2-cabin and 3-cabin flights depending on the route and the airline flown.

While there are no longer Off-peak awards for South America, there are no restrictions on the direction of travel for awards to Central & South America. Additionally US Airways has fairly relaxed award routing rules to South America and you can get 1 stop-over or 1 open-jaw.

Since it will cost you the same whether you fly solely on US Airways operated flights or on any one of their Oneworld partners, this makes it easy to maximize your miles.

Consider the following example itinerary as a great way to use US Airways miles to South America: 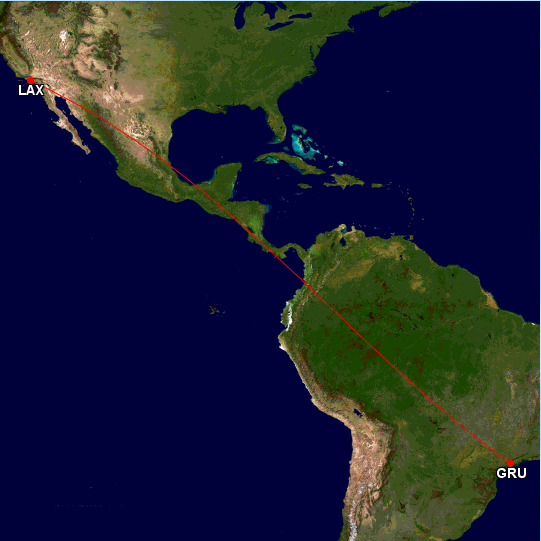 As you can see, by making Los Angeles a stopover, you can get a free one-way to Hawaii for a later date. This itinerary will only cost 60k in Economy and 100k in Business Class!

If you have the US Airways® Premier World MasterCard® then you get an additional 5k discount for booking an award trip on flights operated by US Airways only making this trip’s cost only 55k in Economy and 95k in Business Class.

Additionally you can also have a free one-way to any of the following destinations since they all cost the same amount (in miles) for a round-trip award flight to South America:

You can also use the stop-over in a third region, but as stated earlier in this series, the more complicated the itinerary, the more patience it will require you to convince the agent to price out the award.

You can visit Australia and South America for only 60k in Economy and 100k in Business Class! While, there are no routing rules restricting this route, some booking agents might not be willing to price it out. The best advice at that point is to hang up and call again (HUCA).

Both itineraries discussed will not be charged any fuel surcharges which makes it the “cherry on top.” Booking awards like this are truly the best ways to get the maximum value out of your miles.

The following is a breakdown of possible locations for a stopover on a US Airways award ticket to Central & South America:

You need to either use Qantas or British Airways’ search engines to find all partner award flights. For American and US Airways specific flights only, the AA search engine will be your best bet. This post discusses basic award space search techniques.

While US Airways allowed off-peak awards to South America at one point including premium cabins, the option no longer exists. Therefore currently we have to do the best with what is available. As discussed in the examples above, there are still some award redemption gems to be redeemed.

You can almost always get a free one-way at the tail end or the front end of the journey to either Hawaii, the Caribbean or Central America when booking round trip awards to South America.

If you can book your trip on flights operated strictly by US Airways, then you get an additional 5k mile discount for when you have the US Airways® Premier World MasterCard®.

While it may not be feasible for everyone, an award that includes Australia en route to South America for only 60k / 100k is a deal that can hardly be beat considering the trip will fly more than 22,000 miles in the sky!

As is the case with most “maximizing” awards, it may require a couple of attempts to find the booking agent that will price it out and let you put it on hold. The golden words of wisdom when booking US Airways awards are simply - Hang Up and Call Again (HUCA).

Compare & Learn More About Credit Cards:
top picks
rewards
airline
hotel
cash back
business
Editorial Disclosure: Opinions, reviews, and recommendations on this site are the author’s alone, and have not been reviewed or approved by any bank, card issuer, hotel, airline, or other entity. You can read our advertiser disclosure here.