Since my Club Carlson Premier Visa is the first card I have had from US Bank I thought I would write up a bit about my experience. There have been reports from people having a hard time getting approved for US Bank credit cards compared to Chase, Citi, or Barclays. In late January, I applied for both the personal and business Club Carlson Premier Visa. I was approved for the business card, and after an attempt to call into a reconsideration line (which seems to be non-existent) I had no luck getting the approval for the personal card. 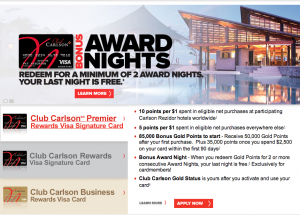 The Club Carlson 85,000 signup offer can be redeemed for four free nights at a top tier hotel

The sign up offer of 85,000 would be worth at least four free nights at a top-tier Club Carlson hotel after spending $2,500 in the first three months. Most top tier Club Carlson hotel award nights are 44,000-50,000 points and if you stay two or more nights you get the last night free. The welcome bonus was 50,000 after the first purchase, and then an additional 35,000 after spending the $2,500 in three months.

With the bonus award night and automatic gold status upgrade from the card, I valued this sign up at anywhere from $800-$2000 depending on what hotel I would redeem my points at and whether I received an upgrade. This is one of several hotel credit cards I had planned to apply for this year.

I was less than impressed with the $1,000 credit line that US Bank issued me and I made the mistake of calling in to ask for a credit line increase a few days after the 30 day window of being approved. There was zero mention of an additional credit inquiry by the representative, but sure enough another hard pull showed up on my credit report. Lesson learned.

I have never had to ask for a credit line increase from Chase or Citi because I was content with the amount they issued me on all past cards, but a $1,000 line of credit was useless for some everyday purchases such as buying a new laptop, or just racking up some charges in the first week of the month.

Obviously I was not happy about the additional hard credit pull, so I called US Bank show my frustration that the representative did not mention that I was outside the 30 day window of approval (by 3 days) and that there might be an additional credit pull. To bring down my agitation, they offered to credit my account an additional 15,000 points. It certainly wasn't worth a hard pull, but made it less painful.

Now that all of my points have posted, I have 114,385 Club Carlson points sitting in my account ready for a trip I am planning to Europe. It is short of the 170,000+ Club Carlson points I hoped to earn from both cards, but the points earned from one signup still makes this one of the best hotel offers available. I especially like the fact that Club Carlson is one of the only hotel groups that did not devalue their loyalty program.

Some properties I am looking at spending my points at include various Raddison Blu hotels across Europe. The ones that caught my eye were: 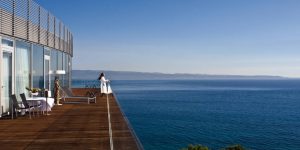 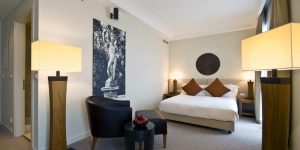