Using American Airline miles to book awards to Europe gives you a variety of options to choose from depending on what your travel needs and plans are. American Airlines offers several flights to different European destinations along with many connections from Oneworld alliance partner airlines.

In this series we’ve been going over the different ways to use American Airlines miles for awards and by far, Europe has the most flexibility of what airline you fly on compared to other regions.

You can use book awards based on any of the three award charts American airlines has, leaving you with lots of options!

On its award charts, American Airlines defines Europe as all countries within the continent and the Caucasus nations within the Middle East. This includes all of these countries:

Which Oneworld Airlines and its Partners Fly Directly to Europe from the United States?

When looking for an award, you may automatically gravitate towards British Airways because of all the award options, but before you go any further, look into other Oneworld options first. Why? Because British Airways has very high fuel surcharges.

Many airlines charge a fuel surcharge on international awards, but not anywhere as high as British Airways which ranges from $300 to $500.

The following is a list of airlines that are partnered with American Airline and offer flights to Europe:

While these airlines all fly directly to Europe, the Partner airlines which are not in the Oneworld Alliance, only work out with the Oneworld and Other Partner Award Chart.

While British Airway has high fuel surcharges, it does offer direct flights to London from several cities from the US as well as to other locations. They also tend to have great award availability so if it’s the only option and don’t mind the costs, then British Airways is an airline to consider.

Regardless of whether or not you plan to fly with British Airways, one of the best ways to search for award availability with Oneworld partners is through British Airways’ website. Why does this matter? Because American Airlines’ website doesn’t provide search results for any of its partners except for Alaska Airlines and American Eagle.

Airlines you can search schedules and availability for on BritishAirway.com

If you still cannot find the itinerary to Europe that you’re looking for, most of the time you can check the individual airline’s website and piece together one that fits your needs. Remember, if you want to book an American Airline award with an affiliate or partner airline, you must do it over the phone.

Now to the good stuff. Which award charts help you get to Europe by maximizing your miles the most effectively?

The American Airlines Award Chart is the most basic and straightforward of the award charts. It’s ideal for one-way or round-trip awards. The most appealing aspect about the AA Award Chart is the MileSAAver Off-peak awards, especially if you’re looking to spend as few miles as possible. The Off-peak awards offer a significant discount compared to AAnytime Awards and even from MilesSAAver Peak.

MileSAAver Off-peak is only available on Economy class, but MileSAAver Peak is available for both Business and First Class as well.

Off-Peak awards to Europe are available from October 15 to May 15. That allows you seven months out of the year to book at the discounted rate. Peak awards are offered year-round but are also subject to availability (read: limited award space).

Let’s compare the difference in savings between the different classes and category options:

While the American Airline Award Chart can provide you with some significant mileage savings, the award chart is actually only available for awards on American Airline flights and not with any Oneworld Alliance partners or affiliates. This also means that you can book your award directly on the American Airline website rather than calling an airline agent to finalize your reservation.

The Explorer Chart is the most flexible chart when it comes to options of places to go, but it doesn’t include awards on non-Oneworld Alliance flights. While free international stopovers aren’t permitted on American Airline awards, you can make several stops in international destinations using the Explorer Chart.

The way the chart works is by distance. A range of distance in miles are categorized into zones and each zone costs a certain amount of miles. You can have up to 16 segments and will still pay the same price per zone, thus it’s solely based on distance traveled. Another rule is that your award must include at least two segments that are on one of the 13 Oneworld alliance airlines other than American Airlines. 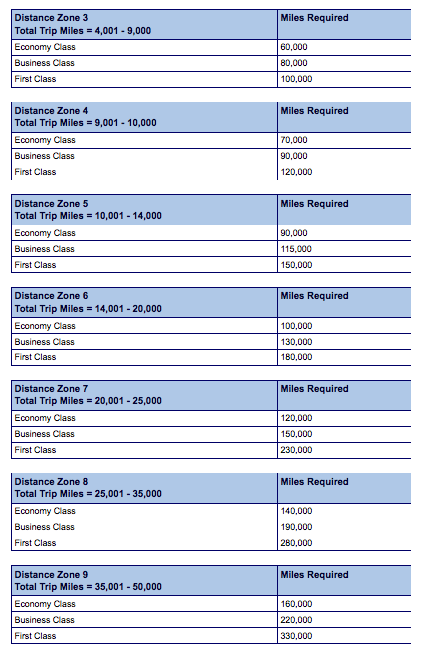 Using the Great Circle Mapper, you can plan out your distance-based itinerary. With it, you can modify the cities in the order you want to visit and determine what zone the award will fall into (and whether or not you have enough miles to complete that particular itinerary). This is my favorite tool for reference when booking distance-based awards.

MileSAAVer Off-Peak for Europe is from October 15 to May 15. 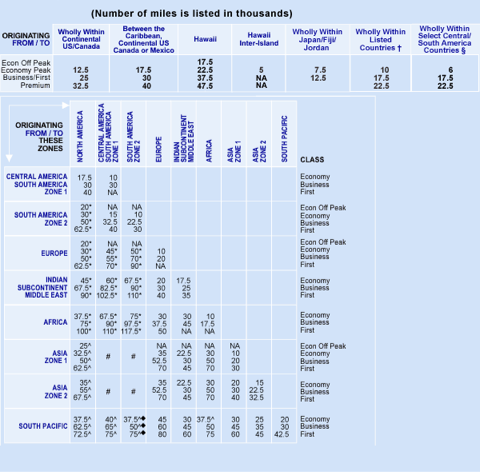 You can use your American Airline miles to fly to Europe on: