Using American Airline miles can be a great way to fly to select destinations within Africa. However, depending on your routing or airline you fly on, you may have to pay higher fuel surcharges. It's important to know which options you have for both airlines and destination when booking award tickets.

While there are different options of airlines to get you to various cities within Africa, you will find that with British Airways your award ticket will include high fuel surcharges, however you get access to many more destinations. To save on fuel surcharges it would be wise to check American Airlines Oneworld Partners for additional award options.

The American Airlines Award Chart is not an option for travel to Africa and since the recent changes to the American Airline charts awards earlier this year, you won’t be able to create any distance-based itineraries to Africa using the Explorer Chart. With that award chart option now gone, the only option is to use the Oneworld and Other Airline Award Chart. 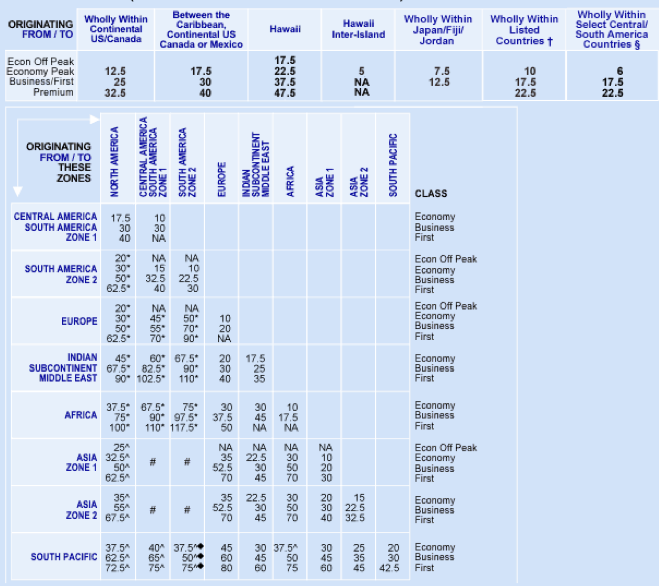 However, it is good to know that there are several partner airline options for awards to Africa using the Oneworld Award chart. Since American Airlines does not fly any of its carriers directly to Africa it is also the only chart that can be used to price out AA awards to Africa as well.

First off, what is considered AFRICA?

* In the award chart, Egypt is not categorized within the Africa, instead it’s considered Middle East. 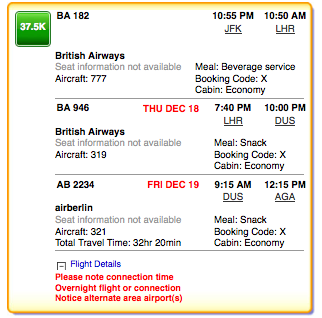 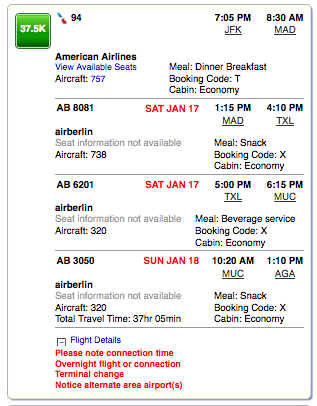 A one-way award ticket to Africa costs 37,500 miles in economy, 75,000 miles in Business and 100,000 miles in First class. Also note that off-peak awards are not available on award flights to Africa, so this may set a damper on any points saving hopes.

On top of the miles required to travel, you are likely to pay up to $365 each way in taxes and fees if you fly on British Airways and connect through London. All flights through London on British Airways include a fuel surcharge and high airport taxes and can make your almost-free award flight, a very expensive one. The best way to avoid paying the high fuel surcharge is by flying into Madrid as a connection on Air Berlin which has considerably low fuel surcharges.

Let’s compare a one-way flight from New York City to Agadir, Morocco between AA miles redeemed on both British Airways and Air Berlin.

Both awards are 37,500 miles in economy class even though one is priced out for December and the other in January. In any case, you will save a lot of money by connecting through Madrid instead of London. The total difference in the price of the taxes and fees is between flying with British Airways via London or AirBerlin via Madrid is $264.

However, one issue you will likely come across is that award seat availability may be harder to come by on Air Berlin, so you will need to be patient and flexible with your travel dates if you want to pay as little as possible.

In general, you will have to be patient while searching for award availability especially if you’re looking to travel to a city that does not have frequent flight service or if you intend to avoid connecting through London.

Cities you can connect through to get to Africa:

You can fly on American Airlines, Air Berlin, British Airways or Iberia to Dusseldorf. From Dusseldorf it is possible to fly with Air Berlin to these destinations in Africa:

With Qatar Airways it is possible to connect through Doha to any of the following cities:

On Royal Jordanian you can connect through Amman to:

British Airways in the leader when it comes to connections to African countries, albeit with high fuel surcharges. You can fly to these destinations on British Airways:

To book an award with Qatar Airways, you would have to call in to the American Airlines reservation line because flight schedules for Qatar are not available on American’s Airlines website. Booking an award over the phone also has a $25 booking fee, which you can try to get waived.

There are various options of getting to different countries in Africa, but keep in mind that the only award chart available when using American Airlines miles Airline is the Oneworld and Other Partner Award Chart. Depending on the airline you decide to fly with, there may be higher costs to factor in if there is a high fuel surcharge like with British Airways, so it is always worth pricing out different routing options.