American Airlines separates Asia into different zones and depending on the zone you’re flying into or out of the number of miles required will vary. For Asia, there are two zones. Zone one covers Japan, Korea and Mongolia. Zone two includes China and Southeast Asia.

The trick to finding award availability for Asia using American Airline miles is knowing which airlines service the zones you plan to travel to and to know which search tools to use.

Which Oneworld Airlines have Flights to Asia?

Cathay Pacific, Japan Airlines, Malaysia Airlines and American Airlines are the four Oneworld airlines that will take you to one of the two zones.

To get to Asia from the US, there are four Oneworld airline options which makes it simple to look for award seats. The four airlines are American Airlines, Malaysia Airlines, Japan Airlines and Cathay Pacific have service to Japan which make it easy to create connections to different cities within Asia.

First, a list of what airlines fly to where and which countries fall into what zone:

Oneworld and Other Partners Awards Chart

You can fly on any of the 4 Oneworld partners that fly to Asia using the Oneworld and Other Partners Award Chart. First: 62,500 miles
Business: 50,000 miles
Economy: 32,500 miles
Economy Off Peak: 25,000 miles (Oct. 1- April 30)
If you’re using the Oneworld and Other Airline Awards Chart, then you can take advantage of Off Peak awards which are only available on Economy and available between October 1 and April 30. This means for 7 months out of the year, you can fly to Asia zone 1 for 7,500 less than a regular economy award.

If you are able to plan your trip around the Off Peak dates, you can easily save 15,000 miles on a round trip award if you don’t mind flying on Economy.

Asia Zone 2 doesn’t have an option for Off Peak awards so the cheapest award travel to Southeast Asia would be the regular 35,000 miles on Economy award year-round.

American Airlines doesn’t service Southeast Asia so that eliminates awards to Zone 2 with the exception of China. American Airlines only services Seoul, South Korea, Hong Kong, Beijing and Shanghai in China and Tokyo, Japan which limits your uses of the chart unless your intended destination is in either South Korea, China or Japan. 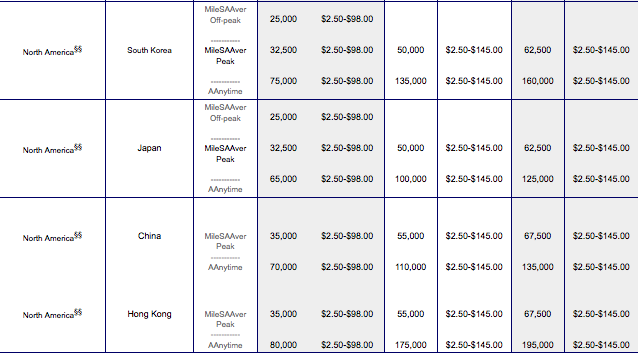 With the American Airlines award chart, the least amount of miles to book an award would be a MileSAAver Off Peak award if it’s available for your destination. Only awards to South Korea and Japan have the option to book an Off Peak award for 25,000 miles which will save you 40,000-50,000 miles per one-way when compared to AAnytime awards.

Off Peak awards are not offered to China, but it does have the option of MileSAAver Peak which is half of what an AAnytime award.

The American Airlines Explorer Chart is a distance based chart and can be a powerful way to maximize your miles. The chart is categorized into different zones, each of which allow you to fly up to a certain distance for set amount of miles. Requirements of an Explorer Award

There are several requirements to book an American Airlines Explorer Award that include completing all travel within a year, flying two or more segments on Oneworld partner airline, and not flying over 16 segments.

Flying at least two segments on a Oneworld alliance partner in addition to American Airlines isn’t too difficult since you have three Oneworld options that will take you to either Asia zone 1 or Asia 2: Cathay Pacific, Malaysia Airlines and Japan Airlines.

Distance based awards are great because you can fly to several cities and the amount of miles you use are fitted into distance based zones. For example, if the total distance traveled flown is 7,351 miles, then the zone would be Distance Zone 3 which costs 60,000 miles on economy.

Here is an example of an Explorer Award to Asia 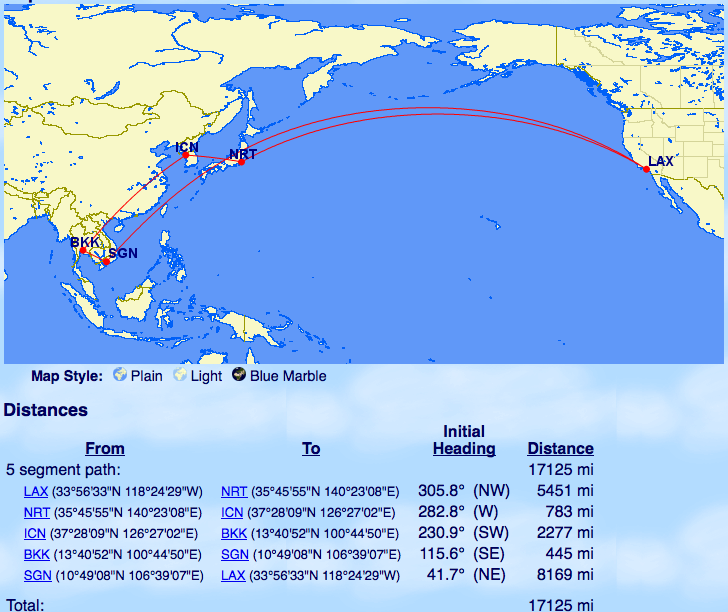 How to Find and Book an Award to Asia

Like most international partner awards booked with American Airlines miles you have to do so over the phone because the website doesn’t offer most results for partner airlines. However, in order to find the best routes and the ones you prefer, you will have to search on the partner airline’s site.

Another option would be to use the Oneworld Round the World tool to find different flight schedules. You will not be able to find availability this way, but at least you can create an itinerary that you can present to the American Airlines representative to work with.

When you are using the search tool from any of the Oneworld partners to book using American Airline Awards, write down all of the flight information of the flights you want including:

Once you have collected all of the information you need, call American Airlines at (800) 433-7300 to make a reservation. Remember there is a $25 booking fee for making a reservation over the phone, it never hurts to ask to waive it, but either way you're saving a lot of money on your ticket booking with miles!