Getting a free flight out of your awards is the ultimate way to maximize your miles and assure you the you’re getting the best possible value. Knowing how to make it happen using stopovers and open-jaw can help you book creative trips that would otherwise cost you thousands of points more or even a thousand dollars or more.

Stopovers and open-jaw rules on award tickets are not consistent across all airlines so once you know which airlines are more generous or more restrictive compared to others, you’ll be able to book a trip that adds the most value to your awards.

This is a basic introduction to what stopovers and open-jaws are and some of the different cases when they can be used. I’ll mention a couple airlines that allow more generous stopover rules, but I’ve also put together a complete list of stopover and open-jaw rules.

A stopover is a stop in a city “to” or “from” a specific destination that lasts for more than 24 hours. In general, a stopover city is enroute to your destination, but this doesn’t always have to be the case with more creative routings.

When using miles, the stopover city must be considered legal within the award fare rules and must be deemed legal routing in order to get the ticket issued. These rules vary greatly across airlines and some offer much more generous and loose rules for what they consider acceptable routing.

A stopover can last as long as you want and essentially allows you to visit an additional destination. However, it’s common for airlines to limit an award ticket to travel within one year.

What is a Connection?

A connection or transfer is when you arrive at an airport and depart from the same airport on the next scheduled flight or within a few hours of arriving (generally less than 24 hours).

How is a Stopover Different from a Connection?

On an international award, a stopover is a stop in a city for more than 24 hours and a connection is less than 24 hours. For domestic awards a stopover is considered any stop that lasts over 4 hours. Generally, stopovers are used to visit and spend time in an additional city on one award.

A connection is when you arrive at an airport and depart on the next scheduled flight, usually within a few hours of arriving.

An open-jaw is when you arrive in one city and depart from another city. The travel between the two cities is not included in the itinerary and can be completed by bus, train, boat, or flights.

Open-jaws add flexibility and allow you to visit an additional destination on an award ticket. An example of this would be to flying to Rome, travel by train to Paris, and then fly home from Paris.

Combinations of Stopovers and Open-jaws

Depending on the airlines award rules you can book awards with both stopovers and open-jaws, with such an itinerary your trip could look something like this. 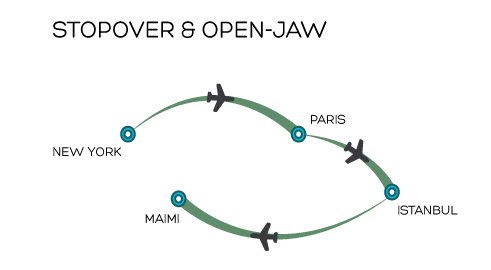 It may also be possible to have stopovers in each direction on a round trip award, for instance one airline that allows this is Lufthansa.

Lastly, some of the most flexible airline miles let you book stopovers on one-way awards. This virtually lets you book almost any creative itinerary you could want and visit two extra destinations for no extra miles. Alaska Airlines miles are particularly valuable because of they allow stopover one-ways, including on partner awards. 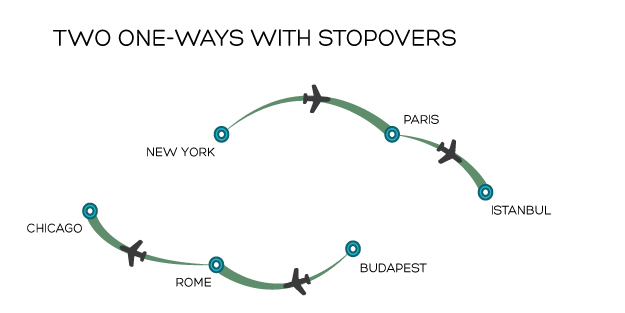 Getting the basics of how to book stopovers and open-jaws can open up a world of possibilities on award tickets. Using them to creative creative award trips and visiting extra destinations at no extra cost, or booking a free one-way at the end of a trip is one of the best ways to maximize your miles.

Find out what each airlines rules are by checking out my full list of airline stopovers and open-jaw rules.