One of the most attractive benefits of the Club Carlson Visa is being dumped June 1, 2015. If you currently have the card, you hopefully well aware that Bonus Award Night benefit allows you to get a last night free on any award stays of two or more nights.

Basically, think of it as a two-for-one deal on two night award stays.

The unfortunate news is that Club Carlson recently sent out emails saying the generous Bonus Award Night benefit will no longer be offered after June 1, 2015. Just to be safe, remember to book any upcoming Club Carlson stays of two nights or longer before May 30th, 2015.

You should even book any stays that you think you may need since you can almost always cancel award stay bookings up until the day you arrive, but be sure to read the hotel’s cancellation policy. 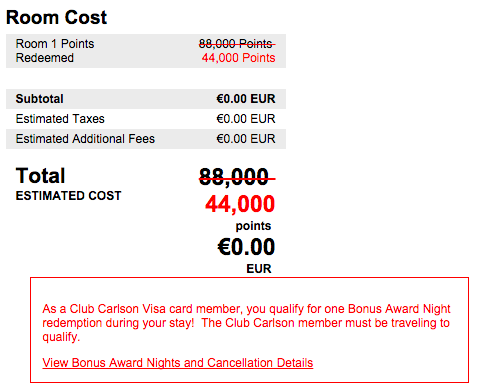 It was great to have the Club Carlson Visa while this benefit lasted and it made it easy to get twice the value from Club Carlson points when booking award stays in two night increments.

Also, don’t forget about Club Carlson’s rather massive hotel category changes resulting in a major devaluation of their points. These changes will go into effect the same day, June 1, 2015 with most hotels moving up a category or two and only a handful are moving down a category.

Check out a full list of all the properties that are changes categories here.

Are you booking any Club Carson stays before the benefit is gone? Where are you traveling?