One of the biggest benefits of booking international awards with Alaska Airlines miles is that you’re allowed stopovers on one-ways awards. I decided to look into this a bit more and see how generous the booking rules are. The results are good.

You can fly on to Asia on Cathay Pacific, Emirates, Delta, and Korean Air and have 2 stopovers and 1 open-jaw. This means you can book a round trip award and visit 3 Asian destinations.

You can get a round trip award flying on Delta for 60,000 miles in economy and 120,000 miles in business class and have 2 stopovers and 1 open-jaw. For instance you can fly from the US to Singapore and stopover in Tokyo. You can also add a stopover on the way back, but you're limited to where you can have a stopover. We'll go over this later.

You can book this as either a round trip award or two one-ways. Remember you have to call in to book awards flying on Cathay Pacific, but awards with stopovers will price out as valid routings when you call in to Alaska Airlines.

I didn’t try to add an open-jaw, but presumably you can have one as well (similar to the routing allowed on Delta).

What Are the Stopover and Open-jaw Rules?

On Alaska Airlines partner awards you’re allowed one EN ROUTE stopover each way and one open-jaw. This means you can have a stopover in any connecting city you travel through. This limits how creative you can get (not as much as on United) but it’s still incredibly valuable.

The easiest way to look this up and find where each routing connect through is to search a one way award on Alaska's website. For instance, if you fly on Delta to Singapore you are going to connect through Tokyo, so you can have a stopover there.

Delta Business Class Award to Asia with 2 Stopover and 1 Open-jaw on Delta for 100,000 Miles

You can have 2 stopovers and 1 open-jaw on an Alaska Airlines award flying on Delta to Asia. Since Delta connects to all of its Asia destinations through Tokyo, you are allowed a stopover there.

You can have 2 stopovers and 1 open-jaw

For instance, you can fly from Portland to Bangkok and have a stopover in Tokyo on the way. Then on your return to the US you could add an open-jaw and fly from Singapore to Portland with another stopover in Tokyo. Not that it adds a ton of value to stop in Tokyo again, but for some it may make sense on longer trips or if you just want to break up the flights.

Using Delta's route map you can see your stopover options depending on your US departure city. The rule is basically that you can stopover in the first or last city you connect through in Asia on your way to or from the US.

When you use Alaska Airlines miles to book an award on Cathay Pacific you can have 2 stopovers!

Stopover in Hong Kong and Bangkok on Cathay Pacific

When I called Alaska to price out the award the representative was hesitant to say that this is a valid routing, but after suggesting to try the award priced out fine. The rep was able to confirm that you can have a stopover in each direction on awards booked on Cathay Pacific. An economy award came to 60,000 miles and $144 in taxes and fees. A business class award would only cost 100,000 miles and first class would be 140,000 miles!

What was more interesting is that Bangkok was not en route--in fact from Jakarta the itinerary had to route through Hong Kong to Bangkok, but the routing was still valid. Presumably there are many more stopover options.

Emirates First Class Award to Asia with 2 Stopover for 200,000 Miles

100,000 miles each way on Emirates First Class to Asia

Flying on Emirates is not the cheapest option out of Alaska Airlines' partners to get to Asia, but if you want to experience one of the best first class cabins in the world it may be for you. 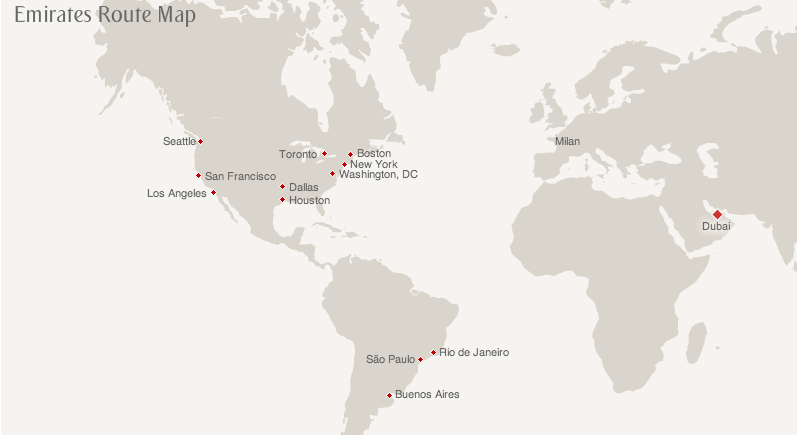 Emirates route map from the US

You can fly to Dubai from Seattle, San Francisco, Los Angeles, Dallas, Houston, Washington DC, New York, Boston, and Toronto. After having a stopover for a few days you can fly to any of the Asian destinations that Emirates flies to. 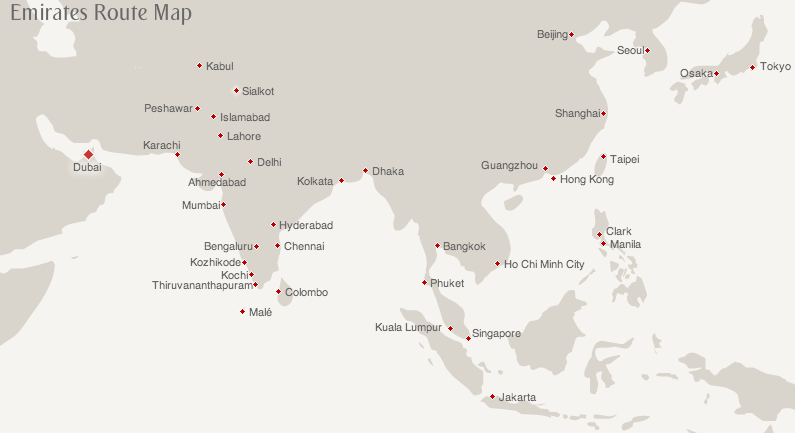 These destinations include Manila, Bangkok, Jakarta, Singapore, Kuala Lumpur, Phuket, Ho Chi Minh City, Tokyo, and many more. You should be able to have a stopover on the way to any of the destinations on the Emirates route map above.

You can also have a stopover in Dubai on awards to India and the Middle East as well.

Korean Air award space is more limited than Emirates, Cathay Pacific, and Delta, but you can still find award space every now and again. When you do find availability, you can have up to two stopovers on Alaska awards flying on Korean Air.

However the only en route stopover option is in Seoul. For instance, you can fly from Los Angeles to Bangkok and have a stopover in Seoul.

You can also add an open-jaw, so you could fly back to the US from Bangkok and also have a stopover in Seoul if you wanted. Remember that Alaska awards on Korean Air are only priced as round trips, so you are not allowed stopovers on one-ways.

What was really weird was when a stopover was added on the return leg Alaska's website priced it out with an additional (and redundant) trip to Seattle and back to Los Angeles. You can see the direct flights from ICN to LAX and then for some reason Alaska's site added a trip to SEA and back to BUR. This left me scratching my head...

Alaska Airlines has some of the most generous stopover and open-jaw rules for international flights. You're allowed international stopovers on one-way awards, which means up to 2 stopovers and 1 open-jaw per round trip. Even though Alaska's not part of any airlines alliances, they have several great partners that you can book flights on using Alaska miles.

These rules are incredibly useful and valuable because you can book some amazing awards when you fly business or first class on Cathay Pacific, Emirates, or on Delta's flat bed business class.

The key is that the stopover has to be en route to your destination, so you can’t be as creative as you could with an award using United miles. The best way to find out where stopovers are allowed is by looking at the partner airlines’ route map. Wherever the flight connects through in Asia from the US is likely where you can add a stopover.

Another way is to search one-way awards on AlaskaAir.com and see what city the routing connects through. You'll be able to add a stopover at any connecting city.