What Can You Get With 70,000 Ultimate Rewards Points From The Chase Ink Plus?

Chase is currently offering a mega welcome bonus on the Chase Ink Plus credit card if you apply within a branch. You can earn 70,000 Ultimate Rewards points after spending $5,000 within the first three months.

If you have been thinking of grabbing this card now is certainly a great time to do so and you can get a tremendous value from the 70,000 points. Here are a handful of some of the most valuable redemption options with transfer partners.

What Are 70,000 Ultimate Rewards Points Worth?

As I mentioned above, I value Chase Ultimate Rewards points at around 2 cents per point. With that value per point the 70,000 points from the current in-branch offer is worth $1,400---even after paying the $95 annual fee the bonus will be worth $1,305. Not bad from signing up for a single credit card!

The other option for redeeming points is directly through Ultimate Rewards travel which allows you to get 1.25 cents per point and book any flight or hotel through the portal. Even at this valuation you are getting $875 in travel before paying the annual fee.

Currently Chase Ultimate Rewards has 11 transfer partners which you can transfer points to. 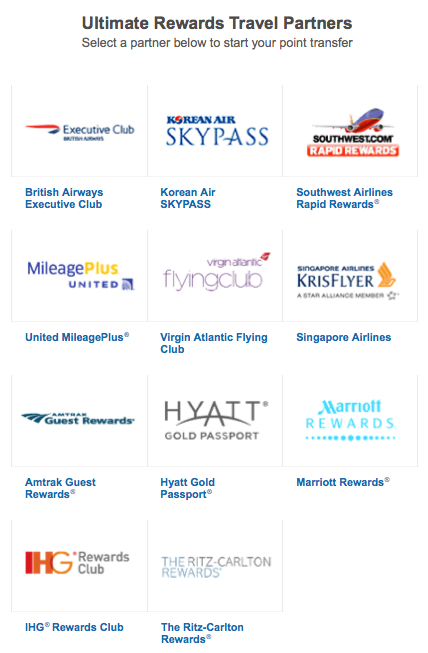 From the list of valuable transfer partners there is a multitude of ways to redeem points for 2+ cents per point in value. Here are a few examples of great uses of Ultimate Rewards points for amazing redemptions.

Even with United’s unfriendly changes to their award chart last year, the program still holds value. The most valuable award redemptions using United miles are for economy class awards, including on partner airlines, and premium cabin awards on United flights. One advantage of using United miles is that they do not pass on high fuel surcharges or fees, so redeeming miles can be a great value to to almost anywhere in the world.

After hitting the spending requirement you will have 75,000 Ultimate Rewards points, if transferred to United miles, then that is enough points for three roundtrip domestic economy flights within the US! Or they could be used for a roundtrip economy flight to Europe and still have 15,000 miles leftover.

It is only 60,000 miles and $107.20 to fly from Los Angeles to Rome this fall, and you could even venture up to Germany for Oktoberfest and add an open-jaw or stopover at an additional European destination. This ticket would cost $1,650.70 if you were to purchase it with cash, and even after taking into account the taxes and fees on the award ticket you are getting 2.57 cents of value per mile. Not to mention you are only paying $107.20 out of pocket for flights to Europe.

However, during Southwest’s sales and generally great value flights you can actually get a value of 1.8 to 2+ cents per point! For example, a Southwest flight from Portland to Los Angeles in September runs around $122 if paid with cash or 6,446 points. Taxes and fees are always low on Southwest award flights and only $5.60 on this flight, so after considering the taxes on the award flight you are getting 1.8 cents of value per point.

The value of Southwest Rapid Rewards points can be doubled if you have the Southwest Companion Pass, which gets a designated travel companion a free flight (only pay taxes) whenever you book a ticket (both paid or with using points). So, if you used the Companion Pass on this flight you could book two tickets for the price of 6,446 and get a value of 3.6 cents per point.

Hyatt offers some of the best value for hotel night redemptions among all hotel programs. For instance, almost any property in Paris will get you a value of 2+ cents per point---the Park Hyatt Paris-Vendrome (category 7) runs around $906 per night or 30,000 points.

The Park Hyatt Paris-Vendrome can go for $906 per night!

With 70,000 Ultimate Rewards points transferred to Hyatt at a 1:1 ratio you would have more than enough for a two night stay at a category 7 property like the Park Hyatt Paris-Vendrome worth $1,812, or 3.02 cents in value per point. Plus you will still have enough for a one night redemption at a category 4 property for 15,000 points.

British Airway is yet another great option for transferring Ultimate Rewards points and is among the best programs for short-haul award redemptions. British Airways prices award flights by distance flown and awards start at just 4,500 Avios each way for flights 1 to 650 miles. A one way economy flight from Chicago to Toronto is only 4,500 Avios and $2.50 in taxes and fees. That means you could book 16 one way flights at this price with the 75,000 Ultimate Rewards points earned after hitting the minimum spend. For example you could fly on American Airlines where a paid ticket may cost $200+, or easily 2+ cents per mile.

On top of the great redemptions for domestic short-haul awards, another valuable aspect of the Avios program is that there are no last minute booking fees like many airlines have. This can save you $75 compared to American Airlines or United when you are booking within 21 days of departure---which makes the program valuable for last minute bookings as well.

Singapore Airlines recently joined as an Ultimate Rewards transfer partner and offers valuable award redemptions. Take for example, a Business Class flight from Los Angeles to Tokyo that would cost $1,997.90 or 65,875 miles---or around 3.03 cents per mile.

There are many opportunities to get much more value per point using Singapore miles on premium class award redemptions and you also get access to more award seats.

There are many ways to get a value of more than 2+ cents per point from Chase Ultimate Rewards. The current 70,000 point offer on the Chase Ink Plus credit card offered at local Chase branches is a supreme deal and can be worth $1,400 in travel when used with valuable transfer partner redemptions.

✈ If you enjoyed this post sign-up to receive blog posts via email (max of 1 email per day) or like us on Facebook! And as always feel free to ask questions in the comments below or email me.